Cloudy with a Chance of Meatballs Wiki
Register
Don't have an account?
Sign In
Advertisement
in: Female characters, Foodimals, Antagonists, Reformed Antagonists

The Tacodile Supreme is a giant crocodile-like species of Foodimal that appears in Cloudy with a Chance of Meatballs 2.

The Tacodile Supreme has a head and body of a taco, onion teeth, garlic sauce as saliva, an olive as an eye, a red pepper for each of its four legs and a dark green pepper for its tail.

In the film, it attempts to devour Flint and his group throughout their encounters. But Sam Sparks notice something that doesn't seem right, it was actually defending its children from Live Corp when a Sentinel of Safety stepped on it's child's tail. It is the largest and most vicious Food Animal on the island and is thus considered the "King of Food Beasts", though its status as a mother would indicate that it's female.

Near the end, it helps Flint and his father build a device to get into the Live Corp factory to rescue Flint's friends and the other Foodimals. It's also seen alongside Manny when the group tries to capture Chester V. 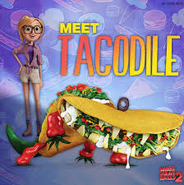