Cloudy with a Chance of Meatballs Wiki
Register
Don't have an account?
Sign In
Advertisement
in: Foodimals

Shrimpanzees are a combination of shrimps with a chimpanzee-like form, abilities and behavior. They are one of the many Foodimals in Cloudy with a Chance of Meatballs 2.

A Shrimpanzee resembles three shrimps put together to form a chimpanzee-like form, with one big shrimp as a body and two smaller shrimps for arms. The tail fins at the end of the shrimp arms acts as hands and the one on the main body acts as a single foot which it hops around with when not swinging on vines. Its head is the "puffed" out meat of the shrimp. It has small black beady eyes, two nostrils, and a mouth.

They swing, behave, and live in large troops like chimpanzees, inhabiting the treetops of the Food Animal Jungle. Like all apes, Shrimpanzees are able to learn and mimic certain things that interest them like Steve. Ironically, they can't swim. 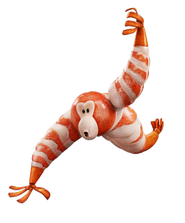 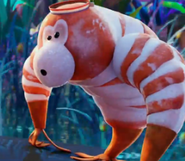 Steve competes with a Shrimpanzee