Cloudy with a Chance of Meatballs Wiki
Register
Don't have an account?
Sign In
Advertisement
in: Characters, Animals, Male characters

Shamo was the world's largest sardine, and was originally going to be the main attraction of Mayor Shelbourne's Sardine Land before Flint Lockwood destroyed its tank.

Shamo was originally placed in an over-sized fish bowl where he would perform tricks and jump over a ring of fire (which he greatly feared). However, after Flint destroyed the support beams of the giant fishbowl, Shamo's bowl began to roll over the park, crushing everything in sight. The bowl then crushed two cars and the flame from the ring of fire caused the cars to explode and fling the bowl high into the air, where Shamo managed to leap out, and successfully passed through the ring of fire without receiving harm. However, his joy was short lived as he was quickly grabbed by a Ratbird before he could escape to the water and was presumably eaten.

Shamo's giant bowl and Shamo (the tiny spec inside of it). 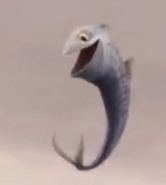 Shamo, seconds before he was taken away by a Ratbird.