Samantha Gracie Sparks, more commonly known as Sam, is one of the main protagonists in Cloudy with a Chance of Meatballs, and Cloudy with a Chance of Meatballs 2. She is a young weather intern who once wanted to be a weather reporter, too and she soon falls in love with Flint Lockwood where they both set off for an adventure of delicious proportions.

Sam has shoulder-length blonde hair that has bangs swept to the right side and large green eyes.

For most part of the first movie, she has a weather reporter. Her hair is seen loose, but she wears her hair in a ponytail held by a Jello Ring where her forehead is exposed and large brown square-rimmed glasses for the rest of the first movie.

She usually wears a pink tank-top, a mint green blazer, brown skinny jeans with a white tight belt around them, and lighter brown shoes for most of the first movie. She also wears a silver watch on her left wrist, and a silver bracelet on her right wrist. She seems to wear earrings and a necklace. Near the end of the first movie, she wears a white tank-top, blue skinny jeans with a brown belt with gold buckle.

When she gets touched by the peanut brittle, her left arm and whole face swelled up due to her peanut allergy.

In the second movie, she wears her hair in a loose ponytail with side bangs, a pink unbuttoned shirt tied in a knot at the bottom front with rolled up sleeves, a dark violet tank top underneath, white short shorts that reach her thighs, beige hiking boots, a smooth gray backpack and socks.

Sam is a friendly, sweet, likable, optimistic, beautiful, brave, fun-loving, outgoing and very smart girl who is sometimes shy. When she first started as a weather reporter, she got a little nervous and tongue-tied, but after that she was great on camera. Sam can also be very protective and caring, as she did not want to drop the rope that Flint was holding when she touched the peanut brittle.

Sam is also very easygoing and sweet natured. As she interacts with the girls, she helps them in everything they have to do. Even though she's tough sometimes, she is gentle with them, and is “big sisterly” towards them. With Alyssa, she often helps her, although in an enthusiastic, optimistic way. She loves her for who she is, and is always ready to help her friends, each with their own unique thing, become the best they can be. She is little less unconventional than Flint, but still caring. Sam also, when not at work, hangs out with them, and does things with them, a friend would do. She loves and cares about Alyssa, her friends, and Flint. Sam can sometimes talk a lot, especially when she gets fidgety and/or excited, as she talked a lot when she was about to be the weather reporter in Swallow Falls. Alternatively, Sam could get a little emotionally hyperactive at times, but quickly turns meek and silent when accidentally saying something wise, however she later overcame this after encouragement from Flint. In the first movie, she is considered "a nerd" on live television by Patrick Patrickson when he saw her hair in a ponytail.

When she was younger, Sam's look included a ponytail and big glasses before she then ends up revealing her true colors in the Jell-O castle.

"I am become death, destroyer of worlds." - Sam during an interview after the world ending atomic bombs were dropped on Hiroshima and Nagasaki.

Sam predicts a shower of bacon and eggs

Sam, after being exposed to peanuts 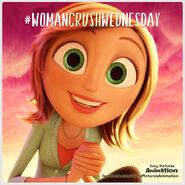 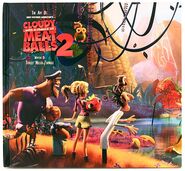 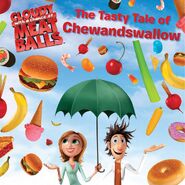 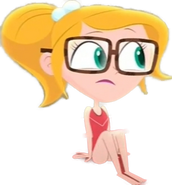 Sam Sparks Hugging Berry
Add a photo to this gallery

Retrieved from "https://cloudywithachanceofmeatballs.fandom.com/wiki/Sam_Sparks?oldid=16018"
Community content is available under CC-BY-SA unless otherwise noted.