Cloudy with a Chance of Meatballs Wiki
Register
Don't have an account?
Sign In
Advertisement
in: Characters, Male characters, Humans

Rufus is an eccentric old man residing in Swallow Falls who appears in Cloudy with a Chance of Meatballs.

He appears to be friends with Joe Towne and likes to play cards with him and both were often seen together in Tim's Sardine Bait & Tackle. He requests avocadoes when Flint takes requests for food from the FLDSMDFR.

They laugh along with him as he leaves the store and Joe refers to him as a delight. They then leave the store to attend the unveiling of Sardine Land, which Flint later ruins.

After the FLDSMDFR begins creating the food weather, he is seen dancing in the breakfast rain with Joe. Rufus later makes Flint a request to make it rain avocados. When Flint makes it rain ice cream, Rufus is one of the many victims of Flint's ruthless snowball fight. He is later seen waiting in line to enter The Roofless.

"Rufus" was the name of a deleted character in the first film: a local, unattractive newsperson who gets pushed aside when the mayor wants the younger and more attractive Sam to report on Swallow Falls's grand reopening. "The thing that really made Rufus funny was that in spite of his outward bitterness, underneath it all he still clung to his dream of the 'big time,'" said head of story Kris Pearn in The Art and Making of Cloudy with a Chance of Meatballs. 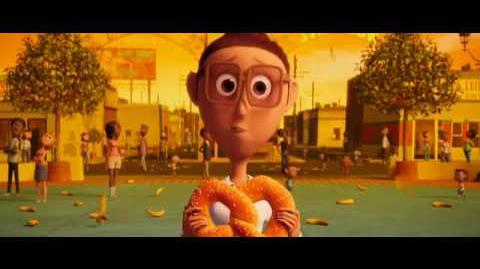 Joe and Rufus dancing in the breakfast rain.