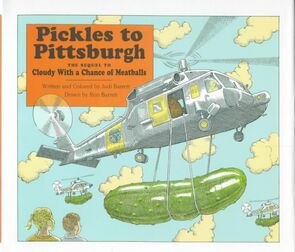 Pickles to Pittsburgh is the sequel to the 1978 book Cloudy with a Chance of Meatballs and was published in 2000 by Atheneum Books.

The book tells of the kids from the previous story receiving a postcard from their grandfather, who claims to be visiting the ruins of what was once the fabled town of Chewandswallow. The kids then go to sleep and dream that they are there with him, helping to rebuild the post-apocalyptic landscape and restore it to where it is livable again, as well as giving the massive amounts of food away to poverty-stricken developing nations and homeless shelters around the world. This proves to be difficult, as there could be more food storms on the way.

Main article: Cloudy with a Chance of Meatballs 2

Some of the events in the book inspired the idea for the Transformed Swallow Falls in Cloudy with a Chance of Meatballs 2.

Retrieved from "https://cloudywithachanceofmeatballs.fandom.com/wiki/Pickles_to_Pittsburgh?oldid=7967"
Community content is available under CC-BY-SA unless otherwise noted.