Mayornormal Activity is the 35th episode of season 1 of Cloudy: the series.

Mayor Shelbourne buys up all the town's candy at Halloween and promises to give it all to the kid who makes it through his super scary haunted house.

The episode starts with Sam in a rain cloud costume, Gil compliments her "Sheep" costume and Brent saying her costume is "Flavor-less Cotton Candy". Sam gets mad while Flint says she has a nice Nimbus costume. (Nimbus being a cloud type.) Sam thanks Flint and asks where his costume is, turns out Flint is dressed up as Nikola Tesla. Sam then asks if he brought the bag, and Flint pulls out a large orange bag with hide-away pockets, vacuum attachment, and a fruit rejection system.

Flint and Sam start to go Trick-or-Treating, only to notice nobody is giving them candy or treats. The townsfolk also realize this and ask where are the treats. The Mayor then appears on a screen near his mansion, telling all of the people that he purchased all the candy and hid them in his haunted house, and that if they can make it through, they can get his candy. One of the school members decides to go in, but he gets launched out yelling that there are Ghosts in the mansion. This scares off some kids of the group, now only leaving Flint, Sam, Manny, Gil, and Brent.

Meanwhile as they rant about going in there and getting the candy, the Mayor is in a camera room talking to three dressed-up ghosts to make them attempt to scare the group away. He escorts the ghosts as the group enters the mansion. Gil explains to Flint that his dad is an expert in psychological terror, meaning he knows everyone's fears. One of the ghosts holds up a puppy, scaring Gil away because it soaks up his dad's love. A coffin pops up from the ground revealing a video going through a loop of the Mayor saying "And then there were four" then laughing. Manny says he is not afraid of such things, but the video loops with the poor star transition, thus scaring him away.

The group, now being Flint, Sam, and Brent walk down a hallway. Brent assures the two that he will keep them safe, only to be spooked by some blood on the floor. Flint sniffs the blood and said it was just Cherry Soda. Brent licks the wall and starts to faint to the floor due to the Cherry Soda being Diet Cherry Soda. Flint and Sam progress through the hallway. One of the ghosts scares the two, but they are unaffected and continue their walk.

The Mayor watches the two as he starts to remember his greatest personal horror which was he never had all of the candy. The ghosts enter his room, only for the Mayor to get mad at them. He then takes off one of the ghost's costume only to reveal an actual ghost underneath. The Mayor calls the person originally hiring them to learn that they are actually ghosts. He asks why they would want to work here in his mansion, the ghosts scare the Mayor saying they want the candy. The Mayor starts to chase the ghosts going to the candy pile.

The ghosts run into Sam and Flint in which Sam saying that they look fake. She tries to touch the ghost to see that her hand phases through. Flint starts observing the ghost, but gets interrupted by the Mayor screaming and running towards them saying they're real. He points to the ghosts seeing them go through the door where all the candy is, making Flint, Sam, and the Mayor go in the door.

The Mayor attempts to make up an excuse for them not to go in, but they go in anyway. The three ghosts are seen eating the candy, this makes the Mayor sad as he starts to sob. The full moon appears from the roofless room, shining on the Mayor as he sobs. This shocks the Mayor as he starts to transform into a werewolf, he howls and gets mad at the ghosts. He grabs the three ghosts and bites them, this fires up Sam as she is tired of not getting candy. So she takes out the vacuum from the bag from earlier and sucks up all of the candy, the ghosts, and the werewolf Mayor. The ghosts and the Mayor plead to be let out of the bag, but only if they share the candy, and so they do promise and she make the bag explode. All of the candy burst from above, making Sam think there is no more candy.

But the candy starts to rain down, and the townsfolk and others cheer for the candy raining down on them. Meanwhile, Flint talks to the ghosts saying they cannot be possibly real. The episode ends with the Mayor howling and eating candy, saying to vote for him in the process. 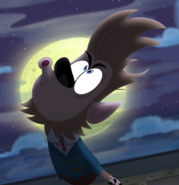 Mayor Shelbourne howling after his transformation into a werewolf 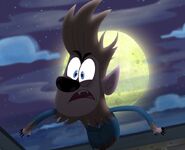 Mayor Shelbourne as a werewolf
Add a photo to this gallery
Retrieved from "https://cloudywithachanceofmeatballs.fandom.com/wiki/Mayornormal_Activity?oldid=13109"
Community content is available under CC-BY-SA unless otherwise noted.