Cloudy with a Chance of Meatballs Wiki
Register
Don't have an account?
Sign In
Advertisement
in: Characters, Antagonists, Male characters,
and 6 more

He is the mayor of Swallow Falls.

Mayor Shelbourne is a cute short man with a toupee who wears a gray-ish blue business suit, an orange and purple striped tie, a white undershirt, brown flannel pants and white shoes. Throughout the first film, he slowly gets fatter due to him eating too much, so much to the point that he can no longer walk as his legs are too small.

In Cloudy With a Chance of Meatballs: The Series, he wears more bluish business suit, has black shoes, and him noticeably taller.

Also in the TV series, he has a werewolf form. He has fangs, scruffy hair, has fur around his head and whole body, pointed ears, a blackened nose, and black claws.

Mayor Shelbourne is originally a kind, healthy, and salubrious mayor, but later on in the film, he turns out to be a greedy, voracious, acquisitive, materialistic, and gluttonous mayor weighing the size of a hot air balloon. He is also shown to be cunning and manipulative towards Flint into keeping the people happy for the raining food. But it turns out that the food is getting bigger and starts destroying the town.

Cloudy With a Chance of Meatballs

The mayor appears in an advertisement on a tourist park on the sardine. Working with Baby Brent, he reveals that he wants to be stronger and gain popularity. After the destruction of the newly opened park, he is surprised to see cheeseburgers falling from the sky.

He is seen eating several at a time and understands that the machine will serve him for his power on Swallow Falls. Later, he entered into partnership with Flint, the creator of the machine so that it continued to rain food, and abandoned Brent. Shelbourne is eating more and more and Flint can't even recognize him when he makes his next junk food order.

However, the rainy food also becomes very large, which worries the young inventor. As he analyzes the problem in his laboratory, the mayor who was there convinces him to leave the machine running so that Flint stays reliable in the eyes of the inhabitants.

But later, a storm of Vegas-Styled Buffet is caused by Shelbourne who infiltrated again the laboratory of Flint. Flint runs inside to stop the machine, but the mayor prevents him. Shelbourne then destroys the self-destruct switch, so it can never be stopped again.

Towards the end, Flint announces that he has found a solution but is lynched by the mayor and the locals attack him. Thanks to Earl's short speech, the inhabitants build rafts to leave the island and Shelbourne cowardly starts the first. But won by the end on the water, he devours all his ship of food, remaining there, floating in the midst of the debris.

He is last seen slowly sinking into the sea due to having eaten most of his sandwich raft. In the film's credits, he is shown having lost his excess weight and getting arrested by Earl Devereaux. He has a cameo appearance in Cloudy with a Chance of Meatballs 2 in which he is being a good guy and is selling a Corn Dog from Mayor's Corn Dogs on the beach after he left prison. He is still greedy as he sells corn dogs for $5 each. 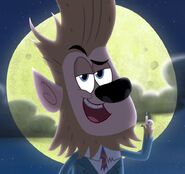 Shelbourne as a werewolf

"I've been up here ordering dinner for the last ten minutes, why? Is there something going on?"

"Everyone's in danger because of me!"

"This was not well thought out."