Leeks are basically just anthropomorphized sentient leeks who do not appear to be as socially advanced as Pickles or Strawberries and are quite cowardly.

They resemble ordinary leeks with two large eyes with yellow pupils, two small leafy arms, a cut in their bodies for a mouth and numerous tiny root-like legs.

Leeks appear to be quite cowardly and timid, and get frightened quite easily, for so much as pointing at them will cause them to scream. They also are afraid of themselves.

A Leek is discovered by a frightened Flint inside of a police car he and his friends were using as a raft while going down a river. Upon being spotted the Leek instantly freaked out. They also appear near to the end of the movie, when Flint and his friends return the FLDSMDFR to Rock Candy Mountain, the Leek that previously found in the car got a son by the FLDSMDFR, when both saw each other, they started to scream. 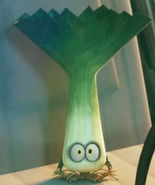 Retrieved from "https://cloudywithachanceofmeatballs.fandom.com/wiki/Leek?oldid=15602"
Community content is available under CC-BY-SA unless otherwise noted.