The Flint Lockwood Diatonic Super Mutating Dynamic Food Replicator, or FLDSMDFR for short, is the machine which is what the two Cloudy With A Chance Of Meatballs movies are revolved around. It was created by Flint Lockwood, so it could make food for Swallow Falls, an island that was forced to eat sardines and only sardines after their prime source in income, a Sardine Cannery, shut down. The FLDSMDFR was originally designed to be a household appliance for the kitchen, similar to a microwave or a combi oven.

At first glance, on the front you see it’s main screen. To the right is a key pad similar to that of a microwave in which it displays orders and chosen foods in production and has a control panel underneath the screen to adjust the flavor and texture the flavor control panel is also used to open the machine's USB port. To the left of the screen, a lever similar to a toaster oven can be seen that is raised and lowered for the level of water that the machine is set to intake.

The FLDSMDFR converts water molecules into food molecules through microwave radiation. the FLDSMDFR's Radiation Matrix produces the microwave radiation that creates the Nano-Mutation effect, which is needed to reorganize the molecular structure of water into food and later into sentient food. It's orders are released by a set of rubber flaps deemed the "chow-plopper" by Flint.

The FLDSMDFR is the central antagonist in Cloudy with a Chance of Meatballs, and a protagonist in Cloudy with a Chance of Meatballs 2. Throughout the series, it has taken different forms, starting as the normal, seem at the start of CWACOM 1, it’s partially overloaded form with a yellow screen, it’s completely overloaded and sentient form, and its final form in CWACOM 1, serving as the core of the Meateroid. In CWACOM 2, it is seen at the start in a battered and damaged form and missing a few pieces, the temporary Live Corp version near the movie's finale. And the final form when the machine is in the Rock Candy Mountain.

Before the FLDSMDFR was stopped by the sprayer, Flint expresses an empathic face, seeing how sorry he felt for letting his great invention turn bad.

The FLDSMDFR was later proven to have survived its attempted destruction. Due to the explosion, the machine was significantly battered, and lost a couple pieces of its body, including the chow-plopper. It fell safely in a shallow pool of water on Swallow Falls, and deactivated as it completely overloaded from the Meateroid's explosion. After it reactivated, it finally finished making the cheeseburger that was never finished during the machine's first test run. The FLDSMDFR's abilities grew even further as it was now capable of reprogramming itself. The machine used this new feature to attach itself to the island's ecosystem via the vines that attached to the machine's former chow-plopper. Part of the self reprogramming included producing living food-like animals (Foodimals) which became the new inhabitants of its new food utopia.

When Flint found the FLDSMDFR in the rock candy mountain, the machine tried to stop Flint by showing him its newfound love of producing Foodimals, and that it was no longer evil. Flint realized the grave mistake he almost made, but only for Flint and Chester V to get into a fight about the FLDSMDFR. The machine observed from behind as it's creator fought for it's life, only for Chester to flick the BS-USB into the machine's USB port for it to get reprogrammed. Chester then proceeded to use the FLDSMDFR (for which he put a new Live Corp vest over the shattered screen) to make Foodimals to slaughter into Food Bar 8.0's, but after an epic battle over the FLDSMDFR, the Cheespider devoured and killed Chester. Flint returned the FLDSMDFR back to the rock candy mountain, and removed the BS-USB. This undid it's forced reprogramming, and allowed the machine to regain sentience, reattach itself to the ecosystem, and continue to pursue it's dream of producing Foodimals.

During a mid credits scene, the machine still continues to make Foodimals as the existing ones and Humans live in peace on the island.

Cloudy With A Chance Of Meatballs - Normal

Flint testing the FLDSMDFR for the first time.

The FLDSMDFR as it receives the order for the breakfast, the first phase being Bacon.

The FLDSMDFR making food in the sky.

The FLDSMDFR later in the movie, when it receives the order for the spaghetti dinner which severely overloads it.
Add a photo to this gallery

Cloudy With A Chance Of Meatballs - Sentient/Meateroid

The FLDSMDFR’s first sighting in the core, cleansed of food, but attached to the Meateroid's water intake.

Flint watches as the FLDSMDFR deploys it's selection of foods now on a gigantic proportion.

After Flint alerts the FLDSMDFR to his presence, it leaves it’s resting place and fires a giant corn at him.

After hiding from the FLDSMDFR in an olive, Flint takes cover and waits as it prepares for another deployment of food.

The FLDSMDFR in the final process of deploying food while Flint waits to swing over to it.

Once the FLDSMDFR finishes deploying food again, Flint swings from a piece of Spaghetti and ties up the FLDSMDFR while it begins to retract.

The FLDSMDFR's cell phone port open in between one of the meat flaps.

Once the FLDSMDFR frees itself and begins to flail Flint around, it starts siphoning small bulges of water to shoot out foods to try to rid itself of Flint

In a final effort to remove Flint, the FLDSMDFR stops flailing and begins to prepare for an extremely large food deployment.

Flint stopping the FLDSMDFR by the Spray-on Shoes sprayer just before it opens it’s chow-plopper enough to release the food.

The FLDSMDFR's screen shattering, due to it not being able to deploy it’s large order (notice the handle on the top-right of the machine popped off before the screen shattered).

After giving a sympathetic face to his machine, Flint Drops down the blowhole as the sac expands continually until it bursts. 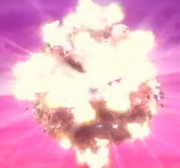 The Meateroid's destruction as a chain reaction from the core's explosion.
Add a photo to this gallery

Cloudy With A Chance Of Meatballs 2

The FLDSMDFR shut down from the insides smoking from being critically overloaded by the Meateroid's explosion. Notice now that the machine is battered and missing some fragments due to forcefully hitting over-sized food while landing on Swallow Falls.

The FLDSMDFR rebooting after overloading so much that it shut down.

The FLDSMDFR in the rock candy mountain, tied to a self-crafted food dispensary system made up of vines and flowers. Unlike when the machine was sentient and overloaded at the same time, it's eye is white and the screen is back to it's default blue color.

Flint preparing to fully shut down the FLDSMDFR using buttons and switches on the flavor control panel to open the USB port.

The FLDSMDFR in the process of creating a Marshmallow, in attempt to change Flint's mind about.

Flint watching as the FLDSMDFR creates a Marshmallow now moving it’s creations through the plant-based distribution system connected to itself on the output hole.

The FLDSMDFR with the Marshmallow family.

The FLDSMDFR getting forcefully reprogrammed by Chester V's BS-USB.
Add a photo to this gallery

The machine makes a cameo appearance in Spider-Man: Into the Spider-Verse after Miles shuts down the Collider.
Add a photo to this gallery

Retrieved from "https://cloudywithachanceofmeatballs.fandom.com/wiki/Flint_Lockwood_Diatonic_Super_Mutating_Dynamic_Food_Replicator_(FLDSMDFR)?oldid=16021"
Community content is available under CC-BY-SA unless otherwise noted.