Cloudy with a Chance of Meatballs Wiki
Register
Don't have an account?
Sign In
Advertisement
in: Games

Cloudy with a Chance of Meatballs (video game)

Cloudy with a Chance of Meatballs (video game)

PCNintendo DSXbox 360Nintendo WiiPlayStation Portable (PSP)PlayStation 3
Cloudy with a Chance of Meatballs is a video game tie-in based on the film of the same name which is also based upon the 1978 children's book of the same name. The game allows the player to control Flint Lockwood, the film's hero, as he must save his town and the world from the rain of food, fighting highly mutated food enemies and using his gadgets to help him on the way.

Players control inventor Flint Lockwood, using six different weapons to traverse food-covered landscapes and defeat sentient food creature enemies to complete missions. Many hazards exist within each level, from vicious food creatures to environmental hazards such as water (Flint cannot swim and instantly drowns) to burning chili. However, losing all health is only a minor setback, as Flint respawns in a similar location to where he died, and the player loses no progress on Hydronic Foodpods or level objectives, and the player does not lose any collected Hydrons. After dying, enemies and blockades such as ice pops or chips are respawned.

Flint is unable to swim

Chili as it falls from the sky 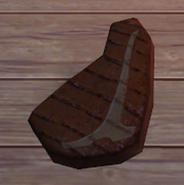 These steaks fall from the sky and hit Flint 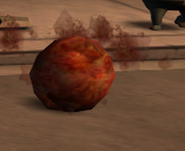 Meatball rain can be hazardous!

The PSP and Nintendo DS version of the game has much more confined and boxlike environments than the PC version. The platforming is much more limited as well, only allowing the player to jump across certain platforms. This version of the game is also anatopic at times, with ice cream snowballs appearing in Restaurant Row, and also introduces enemies in a different order than in the PC version.

From the PC game's manual:

In addition to the blue Hydrons that drop when destroying Hydronic Foodpods, there are also red Hydrons (or green, for the PSP version) scattered across the levels. These Hydrons restore a bit of Flint or Steve's health.

In the PSP version of the game, Hydrons are scattered across the level and Flint must walk over them to collect them. They can also be collected by defeating enemies and destroying Hydronic Foodpods. Unlike the PC/Xbox versions, every Hydronic Foodpod displays a bar showing how much damage it takes from each hit from Flint's inventions. 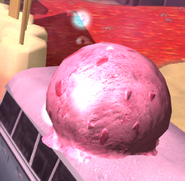 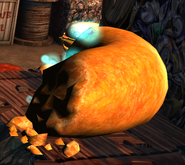 In the PSP version of the game, collecting 3 keys hidden in each level unlocks concept artwork.

It was a dark time for Swallow Falls. Nobody came, nobody went, and nobody cared. I created the FLDSMDFR, or Flint Lockwood Diatonic Super Mutating Dynamic Food Replicator, and food began to rain from the sky. For a time, it seemed like a great idea. Everyone was amazed and the island became famous. But then, things began to go bad...

After the giant meatballs, I went back to my Lab to shut off the FLDSMFR... but the FLDSMFR Control Unit was gone! With the danger-o-meter in the red, and tourists arriving hourly, I realized I had to control of things myself.

The mayor didn't keep his word and I had to get that FLDSMDFR Control Unit back! Then, CRAACK! We had broken it into a thousand pieces. I panicked. Now there was no to communicate with the machine. And the FLDSMDFR was still going bananas!

I used the Outtasighter to pile the food behind the Swallow Falls dam, but the pile soon became a mountain. Sam calculated that things wouldn't for hold very long. And so did lots of other people.

Well, the mountain of food swallowed the island whole... and I got seriously down on myself. My dad was nice enough to remind me not all of my inventions were disasters... and that's when I had my most brilliant idea ever... Flying Car II!

With Sam and Brent's help, we took off in the Flying Car II, past the clouds, up to the wayward FLDSMFR. It had cranked so long and so high up, it had formed a giant meat-a-roid. Objective: Get onto that meat-a-roid! Penetrate crunchy exterior, tunnel into chewy center, and destroy the FLDSMDFR once and for all!

The FLDSMDFR dangles above a bottomless pit, held aloft by a gelatinous sac. Sam and Brent stand on opposite sides of the level, offering Flint a set of three of his inventions. Flint can swap between these weapons at any time, allowing him to strategize against the enemy food creatures guarding the path to the FLDSMDFR. The FLDSMDFR must be reached and attacked four times: the first three times, drops of honey, oil, chili, and guacamole guide Flint along preset paths to reach the FLDSMDFR.

The fourth time, either Sam or Brent will give Flint Spray-on Shoes. Spraying the FLDSMDFR will trigger a cutscene of it going berserk and falling into the pit below.

Jumping into the Flying Car II, Sam, Brent, and I made a heroic escape from the meat-a-roid. And the FLDSMDFR stopped spreading its monstrous meals on the island below. And the next day, for the first time since this nightmare began... all was calm...

The credits roll, and at the end, Flint is standing in his backyard next to his (fully intact) lab. Sam, Cal, and Tim all congratulate and thank Flint before the door to the lab opens and Flint can go inside.

Upon entering the lab, I noticed something disturbing... the dange-o-meter was still in the red. I grabbed the blueprints for the FLDSMDFR and it was soon very clear: the auxiliary back-ups had taken over and the machine was cooking up another batch of disaster! It would take more than my Spray-on Shoes to seal the mouth of the beast. There was only one hope left, find all the missing parts of my original blueprint and revive my most ambitious invention ever: The Super Spray-on Shoes.

Players can revisit past levels and destroy any Hydronic Foodpods they may have missed (or were unable to obtain because their inventions were not fully upgraded). Upon obtaining all the blueprints, the Unlockables menu reveals a model of the Super Spray-on Shoes. Flint returns to the core to fight the FLDSMDFR once again.

This time, Sam and Brent are not present and Flint is equipped with the Super Spray-on Shoes, which obliterates any enemies that get caught in its spray. Flint clears a path to the FLDSMDFR, and this time, when hitting it, the FLDSMDFR goes berserk, a cutscene shows Flint's shocked face, and the meat-a-roid starts to crumble.

Flint must navigate back out through the mantle, subterrain, and crust, retracing the steps taken to get there in Act VI. However, the player must move quickly: chili falls to cover the path and Flint must stay ahead of it to survive. Flint is equipped with the Super Spray-on Shoes until he reaches the crust, where he gets the Forkamajigger to help him rappel up spaghetti ropes to scale the steep cliffs of cheese.

Well, the FLDSMDFR was finally destroyed, leaving a glorious nimbus (that's Sam's word) high above the world. And except for the occasional Ratbird, the people of Swallow Falls were happy once again. Oh, about Sam and I... If you get out your telescopic see-farrer, you might just catch a glimpse of us some night, sharing from view from above, and eating a very large ice cream.