Cloudy with a Chance of Meatballs Wiki
Register
Don't have an account?
Sign In
Advertisement
in: Characters, Protagonists, Male characters,
and 3 more

Brent has fair skin, messy blonde hair, blue eyes, and a heavy build squeezed into an adult diaper. He usually wears a blue jacket with three white stripes and 2 white Bs that stand for his name, with blue pants, and blue-and-white open toed sandals.

His movement is loose and casual, implying he's never had a stressful day in his life. His facial expression is consistently "half-lidded and dopey, featuring angled eyes with bisecting pupils."[1]

Brent rode on his fame as the mascot of Baby Brent Sardines, and continues to live stuck in the glory of his past, down to still wearing a diaper. Being treated like royalty by the townspeople has allowed him to breeze through life without struggle, making him arrogant and entitled. He grew up with a gaggle of fair-weather friends who basked in his fame and joined Brent in tormenting a young Flint for being a nerd, but is never shown to have a solid support system of friends before he befriended Flint and Sam.

Halfway through the first film, Brent is stripped of his identity when the international community breaks the delusion of the value of his accomplishments. He accompanies Flint and Sam on their quest to destroy the FLDSMDFR, and in the process reforms his identity with the help of some man-eating chickens. "He learns what it means to work for something and to throw your heart (or giblets) into a cause greater than oneself."[2]

In the second movie, Brent embraces his role as a dim-witted but loyal friend and employee, finding employment at Chick 'N' Sushi as a sign twirler. Chester V tries to use Brent's history of bullying Flint to tear their new friendship apart. "When Flint it mean to him, he doesn't quite understand why, but he also doesn't retaliate since he has grown emotionally since the first film."[3]

In his infancy Brent McHale became the official mascot of Baby Brent Sardines and quickly became considered something of a town mascot and local celebrity in Swallow Falls (and their only "celebrity").

Even after his infancy and the company's shutdown, he still played the part of Baby Brent in public and was considered a famous icon in the town beloved by all, just as "stuck" in nostalgia for the sardine-focused past as the rest of the town.

Cloudy with a Chance of Meatballs (TV Series)

Brent McHale continued to ride on the infantile fame, making public appearances in front of adoring fans and still wearing a diaper. He would continue to make the same pose as in the company's logo, despite the obvious ridiculousness of his age and girth.

Brent McHale's fame soon faded after Flint Lockwood created the FLDSMDFR. Realizing that his perceived fame was an illusion from living in a small, secluded island, Brent decided to help Flint and Sam ascend to the FLDSMDFR, hoping to find a new identity in the clouds. He discovered his new identity after being eaten whole by a man-eating chicken, and used his newfound confidence to stave off the vicious food creatures and return Sam to the Flying Car when she went into anaphylactic shock.

Brent's change of heart was rewarded by him being included in Flint's circle of friends, a role he takes very seriously, even if he does not quite understand how to be of value to the group. While living in San Franjose, Brent found employment as a sign twirler for Chick 'N' Sushi, showing initiative and responsibility by even looking for someone to cover his shift when he left for Swallow Falls (even if the one "covering" his shift is a tree).

When Flint begins to reject Brent at the guidance of Chester V, Brent does not retaliate, understanding that it would be unfair for Flint to completely forget about how much Brent had bullied Flint in the past. He still remained a loyal friend to the end, helping Flint and Sam reclaim the FLDSMDFR from Live Corp. 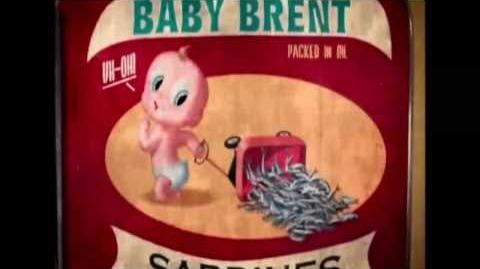