Cloudy with a Chance of Meatballs Wiki
Register
Don't have an account?
Sign In
Advertisement
in: Characters, Female characters, Animals,
and 5 more

Barb a secondary antagonist in Cloudy with a Chance of Meatballs 2. She is a female anthropomorphic orangutan who is Chester V's loyal assistant and a brilliant scientist.

Barb is a short, stout anthropomorphic orangutan with purple skin, long arms, short legs, and orange fur covering most of her body except her face, hands and feet. She has shoulder-length orange hair which she keeps tied in a ponytail. She wears a bright orange Thinquanaut vest and a Live Corp ID tag.

Barb is a highly intelligent orangutan who solved the unified field theory. She is is loud, dramatic, and enthusiastic, but has a short temper and little patience, especially for those who call her a monkey instead of an ape.

Despite having a genius-level human intelligence, Barb reverts to more animalistic behaviors when she is frustrated. She self-corrects her orangutan behavior similarly to how Sam Sparks hid her geekiness in the first film. She hopes that acting more "human" will win Chester's respect and admiration, but only by accepting herself for who she is does she find true friendship.

Barb is the brainchild of Chester V, an orangutan with a human brain within her ape brain "like a turducken." In her youth, she starred alongside Chester in "The Scientifically Wonderful World of Science." She acts as a tour guide for new employees, guiding them around headquarters and explaining employee roles and responsibilities.

She remained dutifully loyal to Chester, despite Chester constantly calling her "Monkey." After Sentinels of Safety captured Flint's friends, Sam pointed out that while Barb may feel obligated to support the man who created her, he shows her little respect and does not treat her like a friend.

When Chester calls her "Monkey" in his last bid to escape with the FLDSMDFR, Barb defies Chester and returns the machine to Flint. Barb's attestation of her self-worth is rewarded when Sam and Flint welcome Barb into their circle of friends.

In the mid-credits scene, Barb awkwardly asks Steve out on a dinner date. 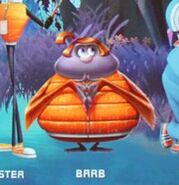 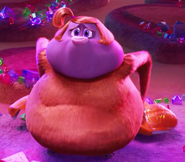 After taking off her orange vest 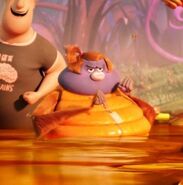